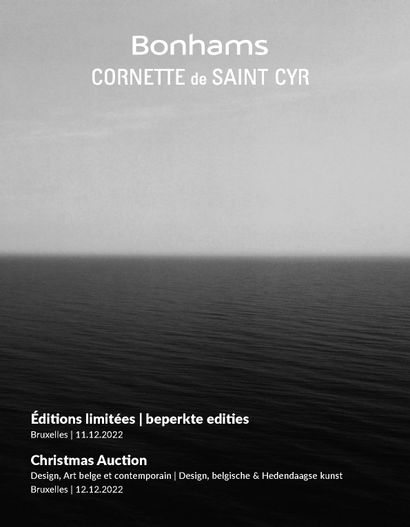 The auction sales organized by the Auction House Cornette

de Saint Cyr Brussels are hereby subject to the following

Goods put up for sale

Potential purchasers are invited to examine the goods

that might be of interest to them during the exhibits

which are organized by the Auction House Cornette de

Saint Cyr before the auctions.

Condition reports may be requested from the Auction

House by letter, telephone or electronic mail. They will be

sent free of charge but are to be used for information only.

The reports will include the artistic and scientific information

known to the Auction House at the date of the sale

and the latter will not accept any responsibility for errors

The descriptions to be found in the catalogue are drawn up

by the Auction House and where applicable by the expert

who assists the former, subject to notices and corrections

sale. Sizes, weights and estimates are given for information

purposes only. The colors of the works included in the catalogue

may vary due to printing techniques.

The lack of information on the condition of the goods in

a perfect state of preservation or free from restoration,

wear, cracks, relining or other imperfection.

As the prior exhibit has enabled potential purchasers to

examine the object, no claim will be accepted once the

hammer has gone down.

The indications appearing on the catalogues, advertisements,

brochures and any other written material

Brussels should be considered as simple indications and

are not binding in any case. They do not guarantee the

exactitude of a declaration relative to the author, origin,

state of the lot. Consequently buyers must verify for

themselves the nature and material states of the lots.

Any claim must reach the Auction by recorded latter not

be considerEd. In any case, for sales subject to article 1649

quarter of the Belgian Civil Code, the seller answers to

the consumer for any fault of conformity that exists when

the good is delivered or which appears within a delay of

one year of this date; the buyer must inform the seller of

the existence of a fault of conformity within a delay of

two months of noticing the fault.

by a depositor and after the publication of the catalogue

or, in the event of a modification to the minimum price

rendering it impossible to put the article up for sale immediately,

the seller will be obliged to pay the purchaser

and seller fees calculated on the basis of the median estimate

stipulated in the catalogue to the Auction House

The article which has been withdrawn will not be

returned to the seller until the aforementioned fees are

paid. If no payment is forthcoming, the article will be put

numbers. The bidders are invited to make themselves

Cyr Brussels before the sale to ensure that their personal

Bidders are generally present in the room.

However, any bidder who would like to place an absentee

bid in writing or bid by telephone may use the form, intended

for this purpose, to be found at the end of the sale

catalogue or on the websites www.cornettedesaintcyr.be,

fr. The form should be sent to the Auction House Cornette

de Saint Cyr Brussels together with a bank identification

deal with auction sales by telephone and absentee bids

free of charge. In all cases, the Auction House Cornette

de Saint Cyr Brussels cannot be held responsible for a

problem with the telephone link along with an error or

omission in the execution of the absentee bids receivEd.

will be given to the earliest absentee bid. The bidder who

is present in the room shall have priority over an absentee

bid should the two bids be of equivalent amounts. The

successful bidder will be deemed to be the individual

who has made the highest bid. In the event of a double bid

which is confirmed as such by the auctioneer, the lot will

have the right to take part in the second sale by auction.

Sales are to be paid for in cash and in euros. Payment

must be paid immediately after the sale. In the event that

the successful bidder has not given their personal information

before the sale, they will be required to provide

proof of identity and bank details.

ln addition to the hammer price, purchasers will be required

to pay the following costs and taxes per lot and

For lots from countries outside the European Union, import

tax will be added as follows:

* additional tax at 6 % of the hammer price.

The successful bidder may pay using one of the following

- in cash within the limits of the legislation in force

- by credit card except American Express

Purchasers who have acquired their items through an

used the services of DrouotDigital (live)

have used the services of Invualable.

These amounts are paid to the platform offering the Live

In case of non-payment within 20 days of sale, the full

unpaid amount owed by the purchaser will be increased

automatically and without formal notice by 15% in order

to cover damages suffered, with a minimum interest

A late payment interest on business transactions, in

charged as of the due date of the invoice, automatically

and without prior formal notice.

The fact that this clause is applied will not hinder the

awarding of damages and costs for the legal proceedings

which will be required, and does not exclude the article

being put up for sale again in a new auction, procedure

Within the framework of the folle enchère procedure, the

Auction House hereby reserves the right to claim for the

payment of the difference between the initial hammer

price and the subsequent hammer price obtained from

the folle enchère procedure, if it is lower, together with

the costs incurred due to the second Auction sale from

reserves the right to offset against the amounts owed to

exclude any or all successful bidder who has not complied

with these conditions of sale from its future auction sales.

the amounts owed are settlEd.

ln the event of payment with a non-certified cheque or

by bank transfer, delivery of the articles may be differed

until receipt of the amounts owEd. As soon as the auction

sale is concluded, the articles will be placed under the

With regard to the collection of lots which have not been

taken on the date of sale, you are advised to contact the

Smaller lots can be collected at Cornette de Saint Cyr,

indications on the first page of the catalogue), only

on Tuesdays, Wednesdays or Thursdays from 9.30 a.m.

of fifteen days of free storage, the latter will be invoiced

Furniture and generally speaking any bulky articles are

kept at our partner’s warehouse. Storage costs are to be paid

by the purchaser and will be invoiced directly by our partners

to the purchaser and in line with the tariffs in force.

The Auction House will not be responsible for the storage

bidder’s expense and under their full responsibility.

These conditions of sale are governed by Belgian law.

Any or all dispute relating to the wording, validity and

performance will be settled by the court or competent jurisdiction

Auction results can be found on the websites

With your consent, we would like to use cookies placed by us on this site. Some of these cookies are strictly necessary for the smooth running of the site. Others are used to:

Your consent to the installation of non-strictly necessary cookies is free and can be withdrawn or given at any time.

By allowing these cookies, you agree to the deposit, reading and use of tracking technologies necessary for their proper functioning.
Read more about our privacy policy.